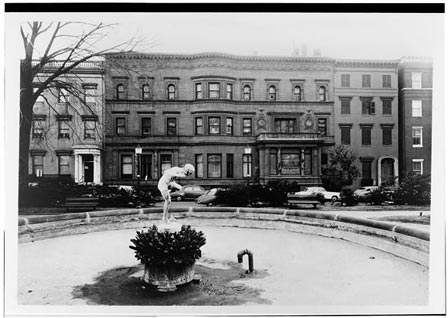 For the first six years of its existence, the Club resided in the Women’s Exchange Building. In 1911, it moved to the new Arundel Club Building where it remained for the next 10 years. The lure of downtown and the need for more space forced the Club to relocate at Light and Redwood Streets in the Commerce Trust Building. The continual expansion of the club again dictated another move into a new facility in the Bickford Building on W. Fayette Street. Unfortunately, after the Club’s 35 year tenure in the same location, the Baltimore Urban Renewal Program of 1960 called for the destruction of the Brickford Building and dictated another move for organization. After an extensive search for a new property, the Club settled in the Garrett-Jacobs Mansion in Mount Vernon. After leasing the facility for a year, the Club purchased the Baltimore landmark in 1962 and remains there today.

Throughout the years, the Club has grown in terms of members and diversity. Although designed originally as an organization for engineers, the Society has opened its doors to men and women from all professions. A celebrated social center with a prestigious business tradition, the Club’s membership is comprised of prominent individuals from Baltimore’s business, political and social communities. The Engineers Club provides these members with a relaxing, intelligent atmosphere that is conducive to the demands of modern living. Current members enjoy entertaining business acquaintances, friends or family in the charm of the historic Garrett-Jacobs Mansion.

For over a century, the organization has served the technical, educational, civic and social needs of the entire metropolitan business and professional communities. The Engineers Club is proud to have played an instrumental role in shaping its Baltimore's character, and welcomes the opportunities to continue to influence its future.